a single firework of fall

In the summertime, we ring in the season with the bursts of bright fireworks throughout the night sky. With the transition from the summer season to fall, the season is ushered in with fireworks seen on a lower plane of vision. Instead of looking to the sky this time of year, we look to our neighborhood flower beds, countrysides, and ditch banks along dirt roads to witness little bursts of bright red firework- like flowers. Set amidst the dark green hues of the late summer/early fall landscape, the Spider Lily offers little explosions of vivid red color to welcome the fall season, as summer slowly fades into the background.

And just like the summer fireworks that ascend into the heavens at their own free will, the Spider Lily seems to appear wherever its free will guides it in our landscape. There seems to be no rhyme, reason or logic to the growth habit of these bulbs. They are seen in clumps, as individuals, in shade, and in sun. Some are in beds, some are around trees, and some just pop up along a random roadside ditch bank. 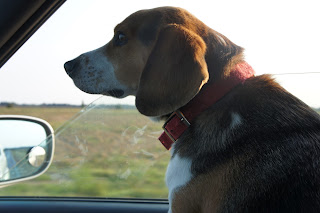 Whatever their reason for location, they have been absolutely stunning in the Delta this year. I discovered a few popping up in my own backyard Saturday. Being too sore from my Saturday of wrestling Asiatic Jasmine in my flower beds to do much of anything on Sunday, I took the hound dog on a Sunday drive...instead of a walk (which we were both totally okay with). It was on this afternoon drive where we discovered an absolute abundance of these radiant lilies just outside the Greenwood city limits. It's as if the Delta countryside was ablaze with a fall firework show. 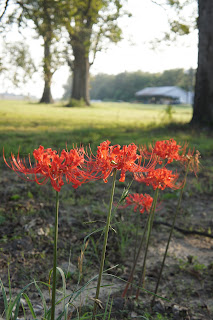 The Spider Lily or Lycoris radiata, an ever so fitting name, is actually native to China or Japan. According to Chris Weissinger, The Bulb Hunter, the red Spider Lily arrived to the US via Captain William Roberts who sailed to Japan aboard some of the US Navy's first steam powered ships in the later 1800's. On his website, www.southernbulbs.com, Chris notes that the Spider Lily is resilient to the stress of drought and upon the first fall rain is when they explode into the shades of red we are experiencing right now. As it turns out the hot, dry summer we have endured in the Delta has lead to this brilliant crop of Spider Lilies seen throughout our landscape. Nature is rewarding us for our own resilience to the Delta summer with these fall beauties. 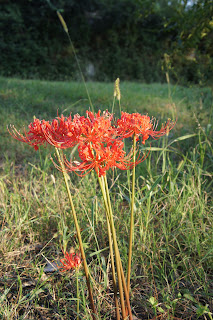 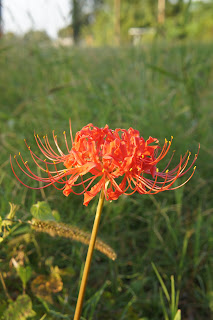 lilies of the roadside

Culture:
The spider lily is bulb that should be planted in areas with full sun and excellent drainage. The bulb performs best when kept dry during the summer months. When the flower stalks emerge, shift to watering regularly. Plant the bulbs in late summer, setting them about 1' apart. As with other bulbs, keep the neck at or just above the soil surface. Transplant and divide spider lily bulbs after blooming. Protect with mulch in the winter.

While the red Spider Lily is the one with which we are most familiar, there are other species. There is even a white varity of the Spider Lily, Lycoris radiata 'Alba'. Other Lycoris species include:
. 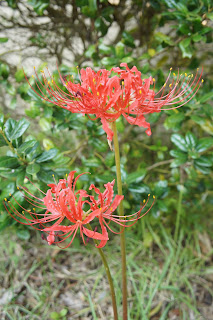 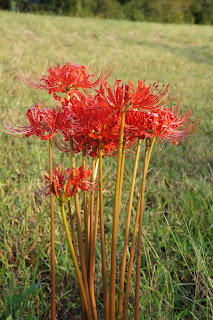 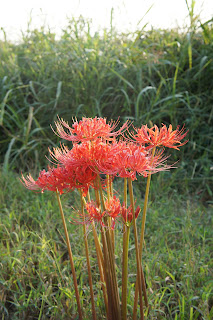 more lilies of the roadside and ditch banks

So instead of gazing upward into the night sky, take a glance at your feet in the afternoon sun to experience the shear brilliance of these fireworks of fall. 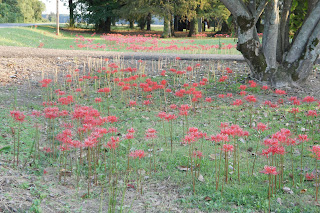 just an entire yard of spider lilies (guard dog of house prevented a better photo...)
Posted by Unknown at 9:39 PM